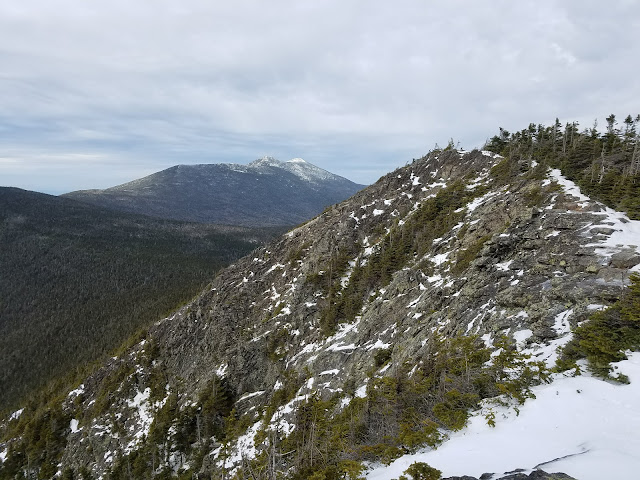 For a little background on this one, this mountain has become my nemesis. I’ve been within a mile and a few hundred vertical feet of the summit twice and had to turn around. The first time was back in 2011 when I was first returning to hiking after back surgery. I got to the Liberty summit on a cold and windy November afternoon. In my less-than-ideal physical condition, I determined that I probably wasn’t capable of getting myself out of trouble if I got lost or injured, so I bailed. The second time was during a heavy snow storm with my brother. We snowshoed exhaustingly to Liberty. The ridge-line trail was very difficult to follow and the snow was very deep. We bailed. That one was an easy decision.
This time was going to be different. I decided to abandon the traditional route via Liberty, because this was going to be another solo winter climb and I didn’t want to deal with the exposed ridge-line again. Turning around for a third time on that ridge would’ve been hard to do. This time I approached from the Lincoln Woods side, which starts as a gradual climb from the Pemi wilderness and only gets steep for the top 1/3rd.
I got an on-time start a few minutes before 9 AM. Since I was solo, and its winter, I carried a full pack including a sleeping bag, and a Jetboil stove (for melting snow for water if needed). The trail was very hard-packed so I started with spikes, but carried my snowshoes on my back as well. My pack was much heavier than would be desired for the planned 11.2 mile climb, but at least I was prepared.
With the hard-packed trail conditions I was able to make great time, I was chugging down miles and awaiting my left turn from the Lincoln Woods trail onto the Osseo trail. Overlooking the Pemigewasset river to my left, I began thinking that the bridge to cross it and get me over to Osseo was going to have to be quite substantial. The water was running really high and the river is already wide at that section. I stopped to check my map and realized my error. There was no bridge. I fucked up. I’ve been in this section of the mountains several times before, and each time, it hadn’t mattered whether I headed out on the East or West sides of the river. The two trails junction a few more miles in, so it was a non-factor for previous hikes. It was a factor for this one. The fact that I had started out so fast only made things worse and took me further away from the starting point.
I checked the clock and saw I had been going for about 35 minutes and had already covered nearly 2 miles. I bushwhacked down to the river to see if there were any safe places to rock-hop across to the west side. There weren’t, so I began backtracking all the way to the trailhead. By the time I got back to the starting point, I’d already burned 3.5 to 4 miles worth of energy/water, wasted over an hour of daylight, and had the starts to a pretty fierce blister. Not how I wanted to begin the day. 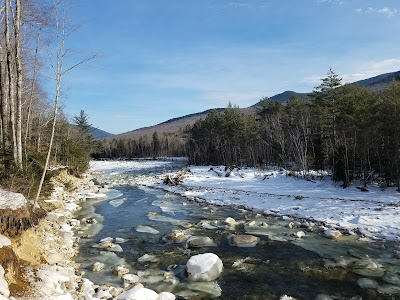 Redoing the math, if I hit the “book time” targets, I’d still be done by a few minutes after 5:00. It’d be dark, but the last several miles were relatively flat and I had a headlamp. It’d be fine. So I started back up again, on the west side of the Pemi this time. The trail starts out nice and open and then briefly dives into a pine forest for some fun switchbacks. It opens up again for a few miles leading up to a series of ladders about 75% of the way up. The ladders cover a series of very steep pitches near the ridge-line, and with the decent amount of snow already down, they were completely covered in hard pack snow to the point that you wouldn’t even know they were there unless you were looking for them. As a result, this section was a very slow and careful climb. The footing is still decent because it wasn’t frozen solid. If it really freezes, I’m not sure this section would be safely passable without an ice axe and crampons.
After the ladders its a few more steeper pitches before it flattens out on a ridge for several hundred yards leading to the final steeper ascent to the summit. Up to this point, I really felt like I was dragging ass. I had hoped to make the summit in under 3 hours, and I had barely made it to the ladders in that time frame (adjusting for my late starting time, I’d actually been hiking for over 4 hours). I was stopping to rest on my poles every hundred feet or so. I didn’t mind finishing in the dark, but I definitely needed to be done the steep parts by then. I later decided it was the extra pack weight slowing me down.
Near the summit, before the final climb, there’s a trail junction with flume slide. I grabbed some extra clothes and Spot GPS tracker and ditched my pack there so I could do the last bit super light. It felt great. The summit was beautiful and worth the wait. I had made it in about 3.5 hours which put me loosely on track for book time (surprising, because again, I felt SO slow uphill).
There were a couple other hikers I had been trading places with on the way up. One of them seemed pretty sluggish near the top and was taking a lot of breaks (no judgment, it was a bitch). While I was on the summit enjoying the view, I saw that they had looked at the final climb (only a hundred yards away) and turned around to head back down. I know not everyone is bagging peaks, but I can’t fathom getting that close only to turn back. I hope everything was alright.
The couple minutes of wind-chill on the summit were enough to drain my phone battery from 65% to 0%. It was only a bummer because I’d been listening to and really enjoying Outside Magazine podcasts on the way up. It also took out my only camera for the way down.
I made it down in barely 2 hours beating the book time by well over an hour (ignoring my ~4 mile detour).  Despite the frustration it was still a really good hike. I’d like to come back to Flume (perhaps via flume slide) in the summer time.
Five to go. 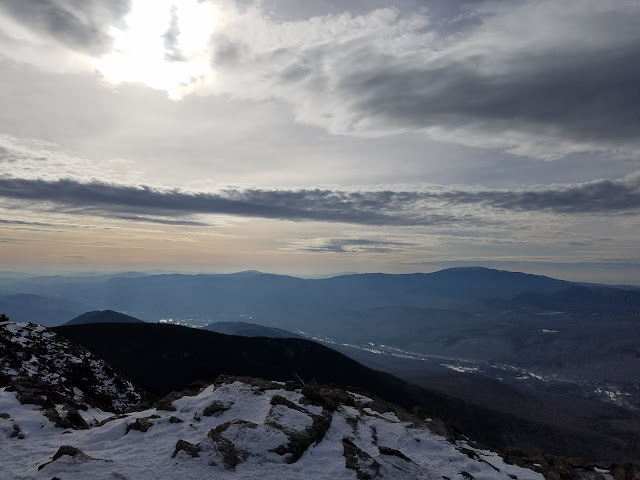