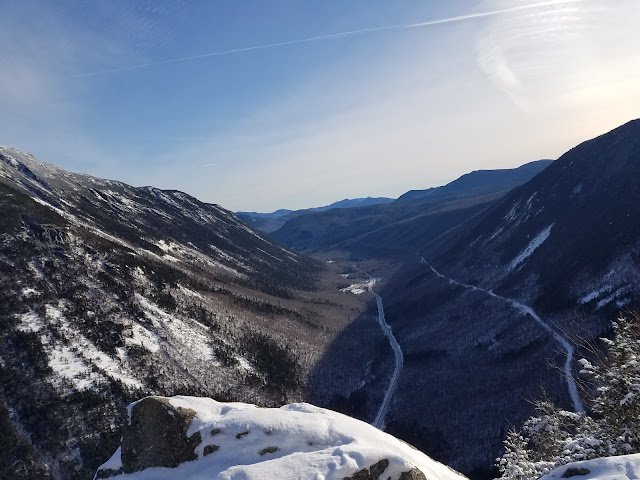 Jacqueline, Christine, Jimmy, and I headed north for our annual post-Christmas hike. The weather was quite good for this one. We decided on Mount Willard because we had heard good things about the view at the top. The trail had been well traveled, so we wore spikes the whole way. 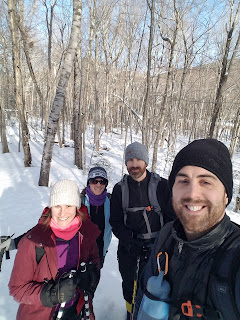 The hike was quick <1 hour up and had excellent views. After we got down, we headed to the Mount Washington Hotel for a drink and then to Woodstock (the Pemi Cabins). 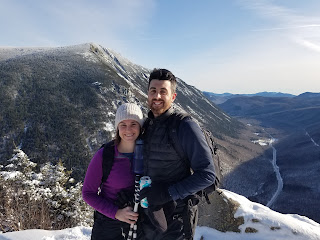 Posted by michael.j.maxwell at 6:40 AM 0 comments 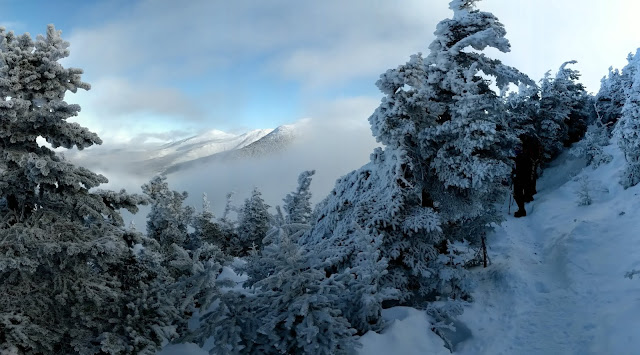 Jimmy, Christine and I headed north at 5:30 from Londonderry on Sunday. Being close to the holidays, we didn’t want to be away all day. We met Steve at the AMC Highland center and made our way to the trailhead. It was really cold and windy gearing up, but quickly warmed up as we started climbing and got into the trees. Snow was very packed on the monorail, so no need for snowshoes (We all carried them just in case). 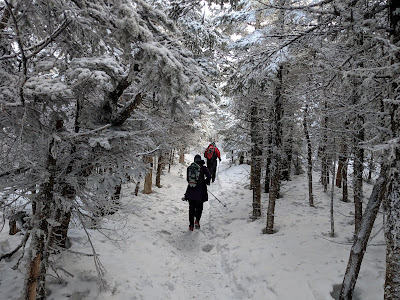 We made great time to the tree-line reaching the summit approach in around 2 hours. We saw a pretty heavily geared up guy coming back down and told us “it gets pretty arctic quick up there”. We decided to gear up at that point for the very short exposed section. He was not wrong. It was windy and very cold above the trees. The summit actually has some tree shelter so we hung out there and got some great pics toward Washington and the other Presidentials. 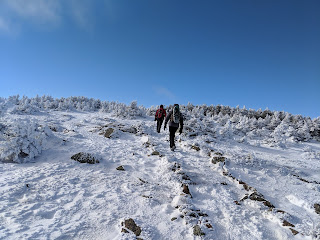 We got lucky, clouds had been blowing over us all morning and we were pretty fogged in right before we reached the summit. It cleared just in time. 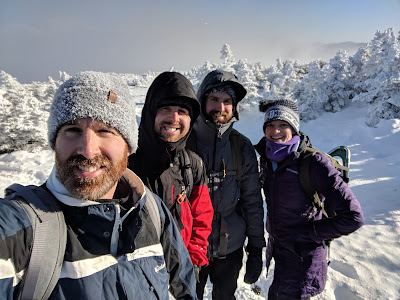 We made it down in 3:30 (RT), and grabbed a big lunch at Moat Mountain before heading home. My second time up Pierce, and first time since January 2012.

Posted by michael.j.maxwell at 1:39 PM 0 comments 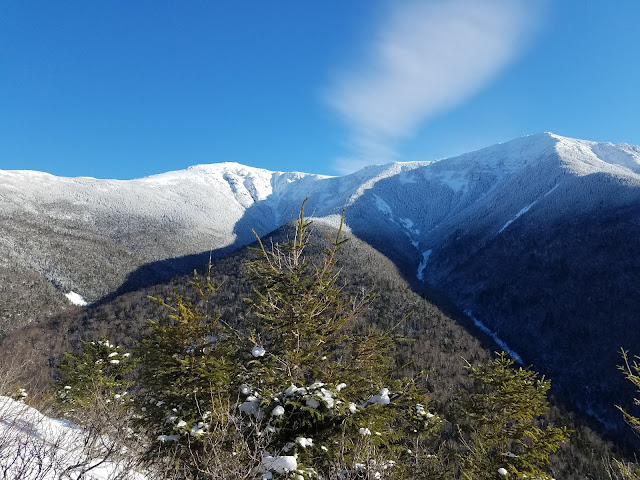 Note: this is not going to be a particularly interesting entry because 1) I’ve done this one before and 2) I mostly want to make gear notes to myself for future climbs in similar weather.

I had to be back in the Boston area for a holiday party in the evening so this one had to be quick. I hit the road around 5:45 to make the Lafayette trailhead ~8am. 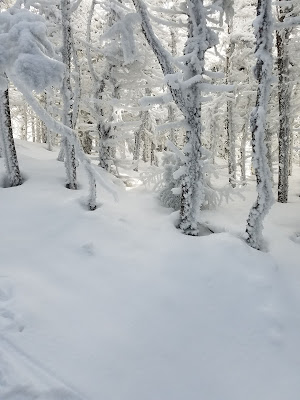 There was already a lot of snow down, so I geared up and opted for snow shoes to start. The trail was completely covered, but pretty packed down. Spikes would have been fine too. It was a good excuse to use the raised heel on the MSR snow shoes. Temperature was 7 degrees in the parking lot. Layers were: standard socks, winter boots, long underwear, hiking pants, shell pants (no snow pants), base layer shirt, fleece, down vest, shell jacket (unzipped), glove liners and ski gloves. For water I had 2 Nalgenes wrapped in wool socks and a large Gatorade. 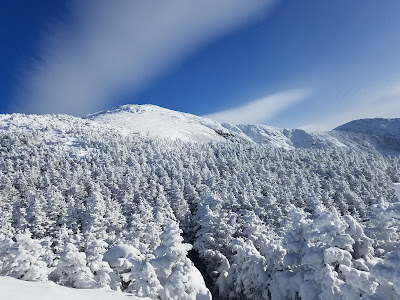 Made good time up to the tree line. For future planning, I should’ve ditched a layer down low and layered up more when I was getting into the wind. I switched to spikes just before making the Greenleaf Hut (closed for winter) where the trail breaks above the trees for the rest of the way. 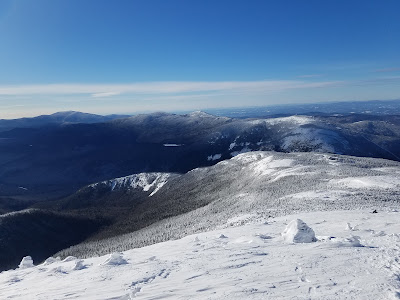 Because of the wind, drifting, and frozen sections, there effectively wasn’t a trail to the top. I followed some old footprints but they would occasionally dead end in deeper snow. It was a mixed bag. Some sections were hard ice such that I was glad I had the Hillsounds on. Others deeper sections would’ve been better in snowshoes. I added neck warmer, goggles, hood, and zipped up everything. 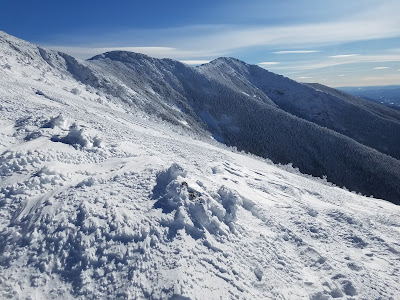 My feet were very cold and toes numb approaching the summit. The last few hundred yards were quite windy and bitter cold. I spent a grand total of 5 seconds at the top and made my way down to get out of the wind. I couldn’t get any summit pictures as my phone would’ve died instantly. I don’t totally understand why, but my feet actually got much warmer on the way down. My hands were cold at times; my gloves definitely have some weak spots. 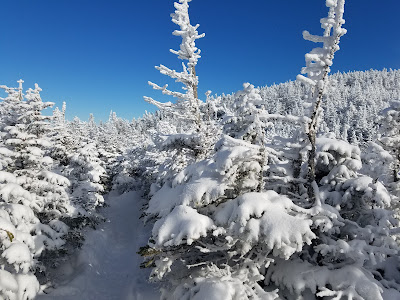 Made it down in a little over 5 hours (about 30 mins ahead of book). Stopped at Woodstock Inn for a big bowl of chili and made it back in plenty of time for the holiday party. 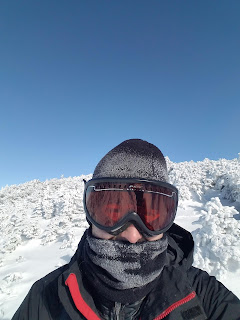 I saw a couple dudes with skis heading up from the hut. I think that could’ve been a blast for a short ride. It was wide open, no rocks or cliffs, not too steep. Obviously a lot of work to get the skis up there. Changing into ski boots at the top also would have been horrendous.

Pictures here
Posted by michael.j.maxwell at 8:58 AM 0 comments