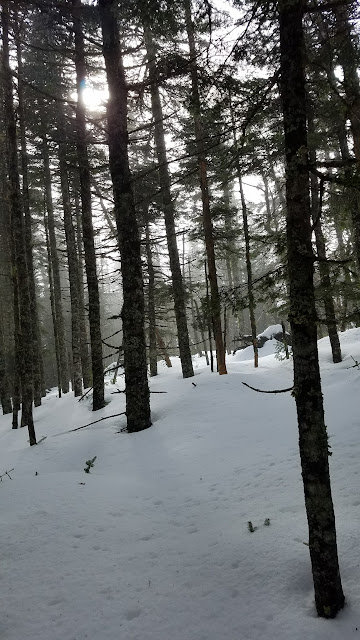 I was looking to do a shorter hike because I needed to be back south for dinner. I had done Moosilauke in snow before, so I settled on it as a good pick. I also wanted to scout out the Carriage path trail for possible skiing later this winter.

The plan was to climb up via the gorge brook trail to the summit, and then come down via Carriage road and Snapper. There was a nice packed snow cover which was on the softer side. Spikes were mostly unnecessary, but I wore them for added traction on the harder-packed/steeper sections. I carried snowshoes but never took them off the pack. 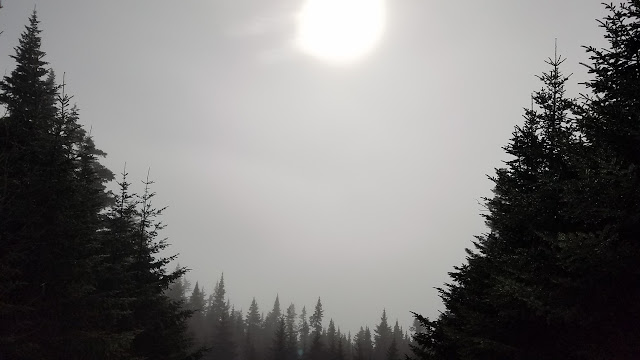 At the trailhead, it was quite foggy, but I could see the sun through the fog, so I hoped I’d climb out of it (and did). Once above the first foggy layer, I hiked in relatively clear conditions until almost all the way to the summit. Unfortunately, the summit was fogged in as well. It was dense enough that I could not see from trail mark to trail mark, and being above the tree-line, I simply had to follow foot-prints in the snow and keep going uphill. 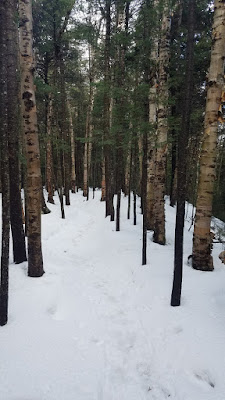 The summit was quite windy. I’d estimate gusts in the 35-50 mph range. Given the poor visibility, and no more foot prints to follow, I decided it was too dangerous to try to find the carriage path solo. I followed my own footprints back to the treeline and made my way back down.

Note: I checked out the new Deli in Truants (Merland's). Great sandwich and excellent beer selection.

Posted by michael.j.maxwell at 1:08 PM