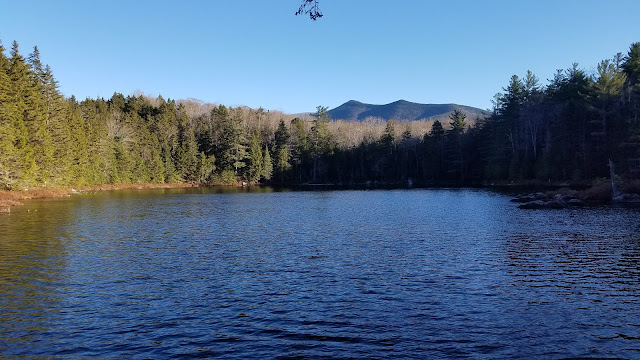 I headed up after work on Friday and grabbed one of the last remaining sites at Hancock campground (in Mid-November… seriously). It snowed while I set up my tent, but I managed to keep it dry. Grabbed dinner in Woodstock and met Steve arriving from Portland back at the campground.

We hit the trail around 7:30 on Saturday morning. It starts very wide and open (a mountain bike trail) for the first several miles. We decided to attempt a bushwhack off the dead-end of the Black Pond trail on the way to Owl’s Head and to just follow the main trail on the way back. The benefit of the bushwhack is that it cuts off about a mile of distance and skips two more substantial river crossings.

The bushwhack on the way to Owl’s Head is easy because you just have to find a trail that you’re traveling perpendicular to. On the way back it would have been quite difficult to do the Bushwhack on the return trip because we’d need to be very precise and catch the end of the Black Pond trail running parallel. Neither of us hike with a GPS. 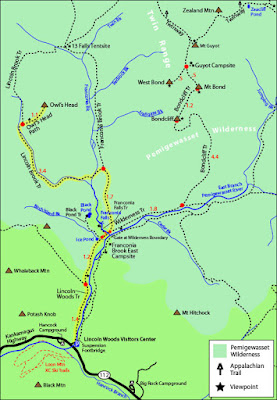 We handled the bushwhack pretty well (traveling at approx. 350 magnetic) and reconnected with the Lincoln Brook trail pretty far west (cutting off a good chunk of distance). There were a few minor water crossings left which were made much more difficult by the nearly invisible thin layer of ice covering many of rocks in the stream. We were glad to have skipped the more substantial crossings, at least until the ice melted later in the day).

From the Lincoln Brook trail, the Owl’s Head path is actually unmarked and not officially a trail. It’s basically an unmaintained rockslide and herd path to the top. We spent a lot of time on the Lincoln Brook trail staring off into the woods to the east to make sure we hadn’t missed the path to the top. Missing it would have been pretty easy to do and cost us a ton of time and distance. When we found it, it was marked with a small rock cairn which helped.  I’m told that rangers sometimes take the cairn down. It strikes me that the safety concerns from having hikers stumbling around searching for an unmarked trail is probably substantially more dangerous than marking the entrance knowing that people will be climbing the unmarked trail. Oh well. 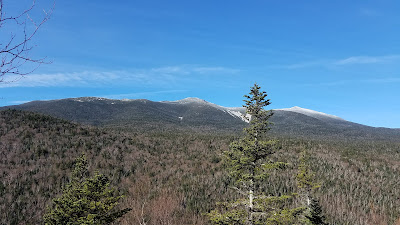 The climb to the top is quite steep (not dangerous, but challenging) and required microspikes at points. We made the summit by around noon which was good time. A couple of good views on the way up the rockslide, but the summit is wooded and not much to see. 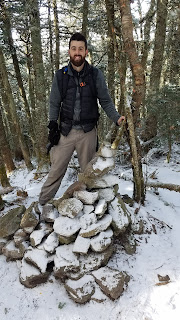 On the way back we opted to stay on the trail and add the extra distance to skip the bushwhack in the fading light. We just wanted to be sure we hit the water crossings before dark (which ended up being fine). The layer of ice that was present in the morning had mostly melted during the day, which made rock hopping much easier.

Sunset was at about 4:30, but being in the valley, it became quite dark shortly after 4. We finished with headlamps on and got back to the car right around 5:00. Book time was 10.5 hours and we did it in about 10. Distance was right around 20 miles.

I’ve read that Owl’s Head is an example of why not to do the 4,000 footer list because it’s so far and the view so unimpressive. I’ll disagree. I enjoy the challenge of getting to places that are difficult to get to. The views we did get, were well earned. At the very least it was a great walk in the woods, which is never bad.

We grabbed dinner at Black Mountain Burgers and made a big fire. We both headed back home Sunday morning. I could barely walk on Sunday afternoon, but I’ll still say “worth it”

Not much for pictures because we were hustling: Pictures here.
Posted by michael.j.maxwell at 11:02 AM