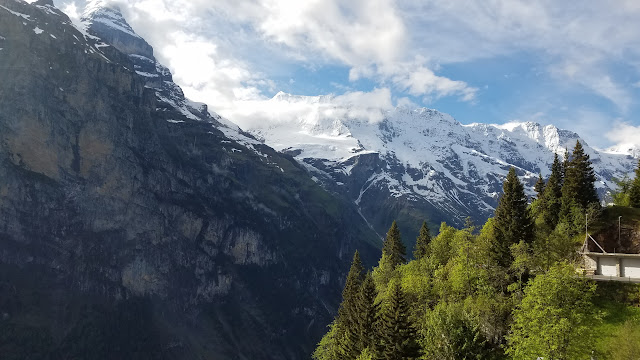 Recapping this a few months after the fact, but based on emails and pictures I can piece it together. I'll reference the trail map included below. Because I backtracked, I lettered the path to make it more clear (A-H).

Left Murren on a rainy morning (Trail mark A). The north face trail climbs a narrow paved road at first, and then exits onto a farm path with lots of very large, not very shy cows. At several points, I had to navigate around groups of cows blocking gates and pathways. Not being a farm guy, they're pretty intimidating up close, but I got the sense they're harmless. From there I continued on the #3 trail (pink) climbing steeply up the side of the Schilthorn with lots of switchbacks. The rain stopped and in the brief periods that the clouds broke, the scenery was incredible. There was still a decent amount of snow (considering it was June).

I continued on the ridge below Bryndli (Trail mark B) and worked my way up to the Rotstockhutte. Before I left on this hike, in town, I had a hard time getting a sense for the trails and what was "safe" to do. When I arrived in Murren, I was carrying some of the luggage from my business trip, so I probably didn't look like much of a hiker. The recommendations I got were mostly paved paths and chair lifts. I was not trying to get into any ice climbing, but I don't mind some snow, and certainly can comfortably climb some grades. The B&B host discouraged me from going upward in altitude at all, and told me that the trail up Schilthorn was "closed". There's nothing marking closed trails, so I took a method of cautiously going where I wanted and backtracking if it got ugly. 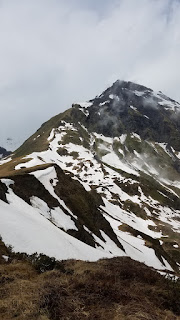 Back at the Rotstockhutte (Trail mark C), the clouds cleared and I got some incredible views of the valley down to Lauterbrunnen and across the valley at the Eiger. I could also see Schilthorn from there. I never really intended to go all the way up because I knew the trails were closed, but this was my first view at how impassible it really was. The steep ridge was covered in ice, and precariously balanced 15 foot tall walls of snow overhung various points of the trail. The sound of avalanches in the valley below, made it an easy call to stop going any further up-hill. I got some soup and crackers from the hut and continued on my way. 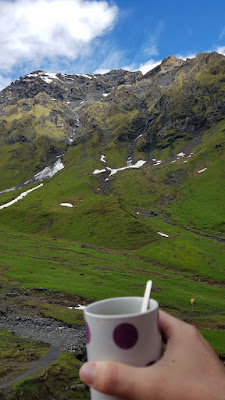 From the Rotstockhutte I decided I'd try to take the #11 trail back to Schiltalp and reconnect with the Northface trail to get back down to Murren. I climbed the south side of the Wasenegg ridge (Trail Mark D) which is a mostly gradual climb, but increases in grade as you approach the ridge. At the top, I could see down into the valley below. It was quite clear that descending the North side of the Wasenegg was not happening (Trail Mark E). A snow bowl had formed and collected at least 8 or 9 feet high. It was a perfect crevasse recipe. My legs were still feeling good, so I decided to take one more crack at descending the north side of the Wasenegg ridge from a different (and hopefully safer route). I had heard from my brother Jimmy, that walking along the Wasenegg was disorienting. It's about as wide as a sidewalk, so quite safe to walk along, but on either side of the sidewalk is a fall that would last about 1,000 feet and not end well. If you're walking along a sidewalk, there's little risk of suddenly stepping off, but the stakes are certainly elevated walking this sort-of tightrope. 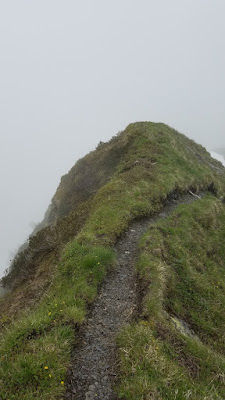 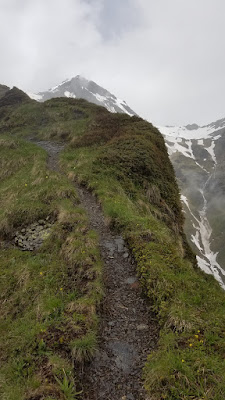 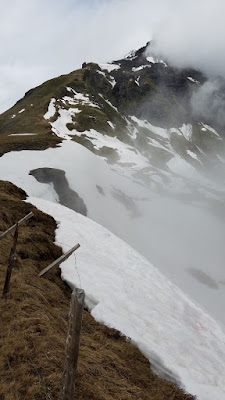 I headed west, climbing uphill toward the Schilthorn. To the south, the rocky ridge descended back down to the valley near the Rotstockhutte. To the North, the snow bowl continued to be a daunting obstacle. I made it to the high western edge of the Wasenegg ridge (Trail Mark F) where the last trail branched north into the snowbowl, but again found it impassable. I backtracked east along the ridge toward Bryndli, once again, trying not to look down. 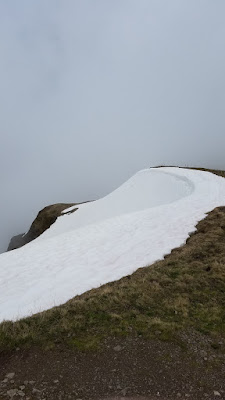 (not climbing down that)


When I got back to the eastern part of the Wasenegg where I started, rather than backtracking, I decided to make my way all the way down the east side of the ridge called "Bryndli" (Trail Mark G). This part was scary. The trail narrowed, and the ridge got steeper. Because of some major erosion, the "sidewalk" narrowed substantially, and was no longer flat, but rather pitched at a 45 degree angle down hill. There was a traverse rope to navigate this portion, but that's a lot of faith to put in a stranger's rope. I very carefully side stepped across the Bryndli section and stayed very low to the ground to avoid losing my balance in a gust or muddy slip. 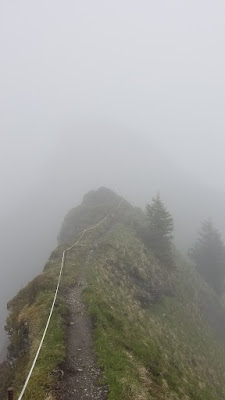 
After Bryndli, it was mostly back tracking to Murren (Trail Mark H). I cleaned up and headed over to the Eiger Guesthouse to watch the Euro cup. Pretty great day.

While the clouds and rain were not ideal, they made me appreciate the unbelievable views when the weather cleared. This area was the most beautiful place I've ever seen. 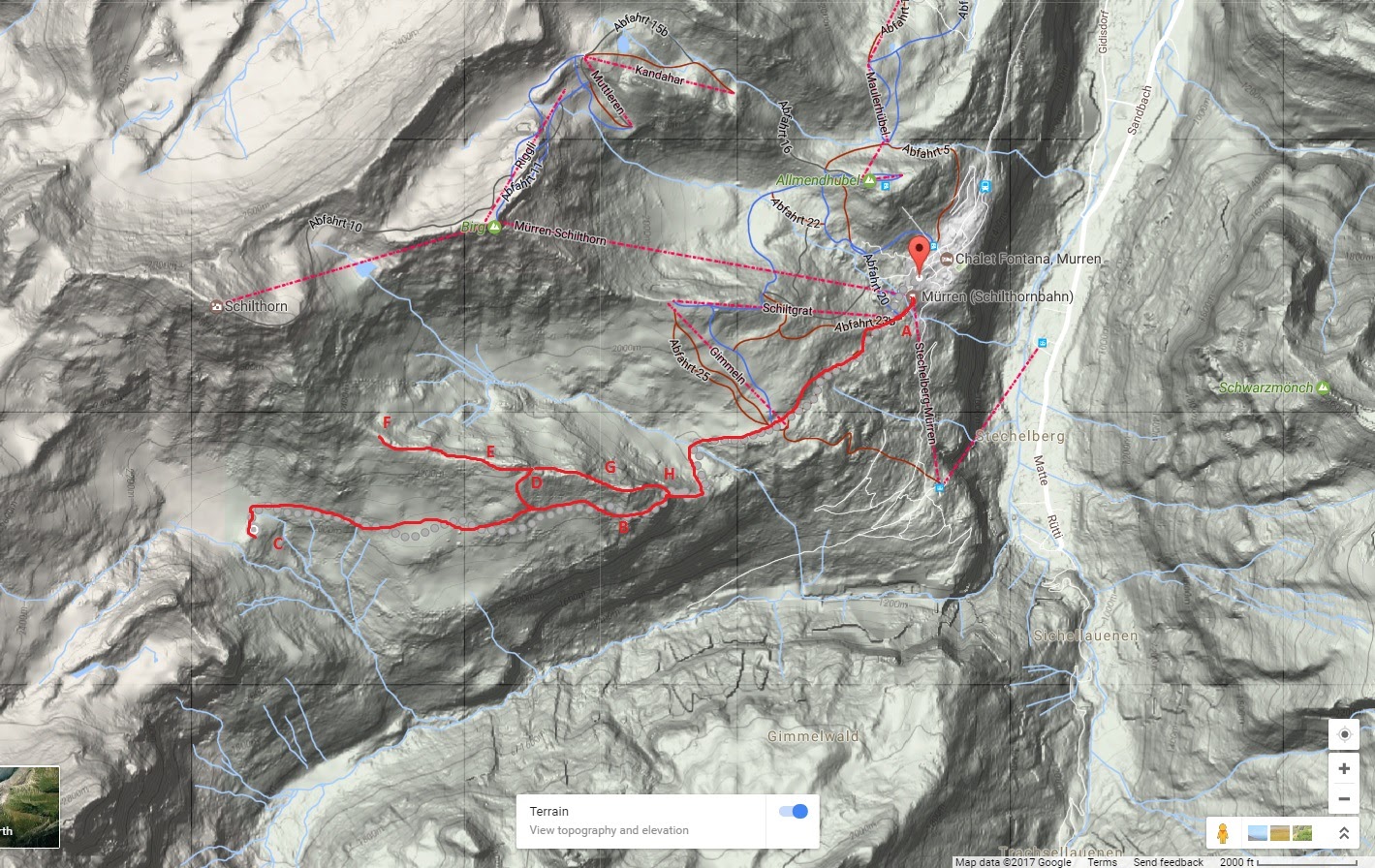 Hike and other Murren Pictures here