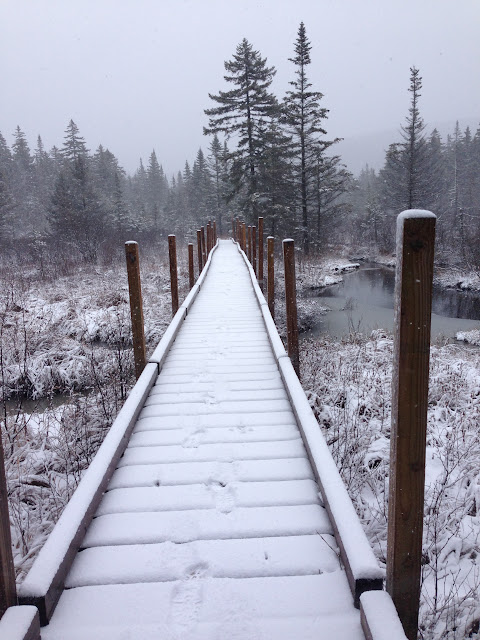 This one started as a pretty ambitious plan. Starting Thursday, I was going to drop my bike at the Zealand Road Trailhead (around mile marker 13 on the map below). I was then going to drive back to the Haystack Road Trailhead (mile marker 0), and hike from the car  to the Zealand Falls Hut (mile marker 11.5). On Friday, I would wake up and head to my bike and then ride the roads back to the car. This would bag me both North and South Twin Mountain, as well as Mount Zealand. 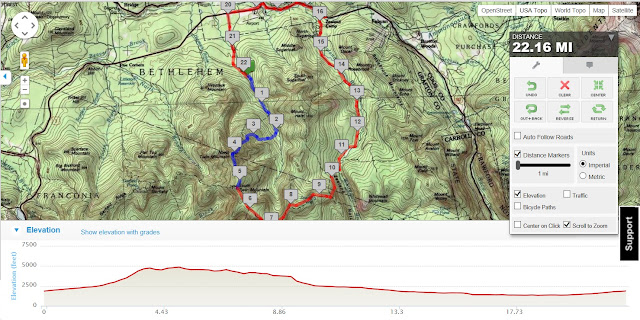 A couple things didn't work out. First, the weather. It was supposed to snow 1-3" on the ridgeline, but just be a dusting at lower altitudes. Second, it had been raining for several days before I got there leading to very high river and stream flooding. More on that later.

I left Boston at 4:30 AM on Thursday to make the most out of the late season daylight. When I got to Bethlehem, a little after 7:00 it was 38 degrees and misting rain. Pretty gross for hiking. I ditched my bike at the Zealand Road Trailhead under a tree and drove about 25 minutes back to the Haystack Road Trailhead. As I geared up, the temperature had dropped to the low 30s and I saw a few snowflakes among the rain.

Under the tree cover, the rain and snow were mostly blocked and I made very good time heading up toward the peak of North Twin. There were several higher than normal stream crossings, but nothing too troubling, and I stayed dry.

About 2 miles in, I got to a river crossing that was completely washed out. There was no where to go across without getting waist deep in fast running water. I bushwhacked off trail following the river for about half a mile, but it was all the same. There were a few places where I could get pretty close to making in across, but each one had at least one place where I was going to be very wet in fast running water. The mixed rain had turned to all snow, and I decided it wasn't worth chancing and made my way back to the car. 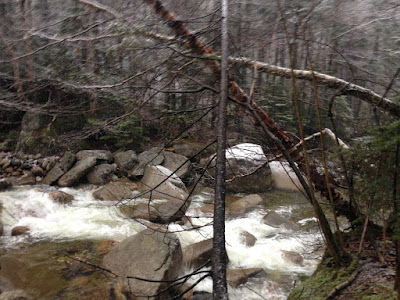 By the time I got back to the car, the snow was covering the road. As mentioned earlier, it wasn't supposed to snow this much down low. I decided that I wanted a plan that had multiple options to shorten or bail entirely given the conditions. Zealand was appealing because I could approach from the side of the trail with the hut, drop my pack at the hut, and continue on only if the conditions were good.

When I got back to Zealand Road, (between 16-17 on the map above) the road was already at least an inch deep in snow. I had spoken to the AMC the day before the trip and knew that they might close the road if it snowed. I did not want to chance driving 4 miles up to the trailhead only to have them close the gate and trap my car inside, so I parked on 302 and decided to walk the road. That meant my bike was stuck at the trailhead, but that was a problem for another day.

The road walk was about 90 minutes, but really cool with the trees already bowing over with snow. On approach to the hut, the wind had really picked up and was blowing the snow around. I could no longer see the peak of Zealand, and my boots had completely soaked through. It was only 2PM, but I was decided to call it a day when I reached the hut.

Like the other AMC huts, Zealand Falls Hut is unheated in the winter, but provides a gas stove in the kitchen, and dry bunks. I was the only one at the hut when I arrived, so I warmed up in my sleeping bag, read my book, and napped through the afternoon. Around 4:00, the caretaker arrived and fired up the woodstove. I spent the evening with about 9 other hikers who were passing through. We traded beers for bourbon and swapped hiking plans and ideas. A couple of guys were going to hike out really early, so I agreed to join them for the first half mile or so. 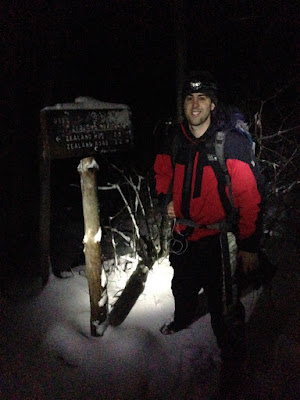 There is zero cell service in this part of the White Mountains, and I felt guilty about not being able to check-in. Getting out early sounded like a good idea. We were on the trail around 5 AM on Saturday. It had snowed over 6 inches at the hut and was still coming down a little when we set out. We trekked down with spikes on and headlamps lighting the way. I said goodbye at the trail split and made my way down to my bike alone. I was back to the trailhead well before the sun had come up, and now had to deal with my bike. 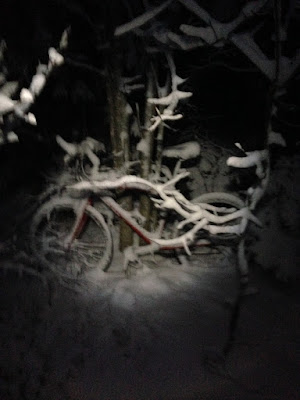 It was completely frozen when I pulled it from under the tree to the point that the wheels wouldn't even rotate. I got it on the road with the plan to just walk it back to the car. After a few minutes, the wheels were turning, so I did some gentle gliding. It definitely was not built for the snow, and I'm pretty sure most bikes aren't. I rode the bike like one of those toddler bikes with no pedals, and had my feet dragging on the ground the whole time. It took a long time (1 hr for <4 miles) but I made it back to the car without incident. 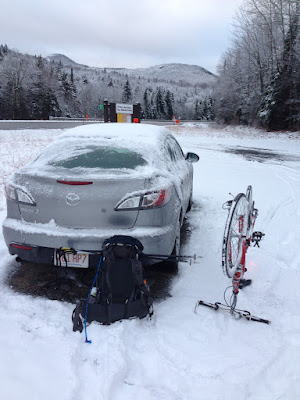 I ended up bagging 0 of the 3 intended peaks, but given the weather and being solo, I had no regrets. It was a really fun couple of days and I hope to get back to that section soon in better weather.