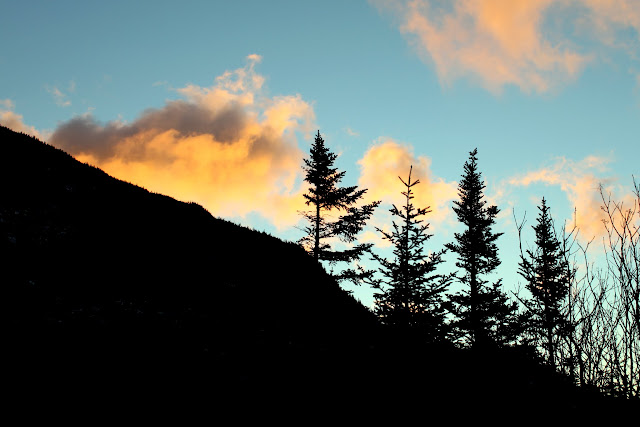 Steve and I met on Saturday morning near Wildcat on 16 and dropped cars at both Nineteen Mile Brook and the Imp trailheads. We had a reservation at the Carter Notch Hut and the plan was to hit four 4Ks on Saturday, crash at the hut, and then hike out on Sunday.

It was pretty warm at the base and very windy. There were a surprising amount of cars in the parking lot for this late in the season. We took the Imp trail which is very gradual, and then turned onto the North Carter trail which climbed more steeply to the Carter ridge. The ridge is mostly under tree cover but occasionally had impressive views of Washington in the clouds and a clear view into Maine to the east. The wind was strong but not overpowering and the temperature had dropped into the high 30's on the ridge.

We hit Middle and South Carter and descended to Zeta Pass. We had to decide whether to head to Mount Hight which is over 4,000 feet but not an official 4K, or to bypass Hight and keep going for Carter Dome. We were losing daylight, but decided to go for it anyway since we had heard it had great views. It turned out to be a great decision. Mount Hight has 360 degree views of the White Mountains and the wilderness area to the east. Its probably the best overall view I've seen in the White Mountains to date.

From there, we hit Carter Dome, the 4th summit of the day and the 3rd from the official list. It was around 3:45 when we got there and we realized we had no shot of making it to the Hut and getting up Wildcat before dark. The Carter Dome summit is at 4,800 feet and the hut is down all the way to 3,200 feet with only a mile of trail between them. Its a pretty steep downward climb. At various points on the trail we could see the Hut way down in the Notch below, and we could see Wildcat A rising very steeply to the south of the Notch. At the time, climbing Wildcat A seemed like it was a climb going straight up a cliff.

We arrived at the "Hut" just before sunset. Its really more of a compound with a main building with a woodstove and kitchen and separate bunkhouses. It sleeps 40 people and there were 28 people on Saturday night. We signed up for a dinner slot (for access to the kitchen) and played some cards and drank some bourbon. We ate a big dinner before crashing early. The bunk house was very comfortable. Its unheated but provided mattresses, pillows, and good wind protection.

It snowed an inch or so overnight and we got up early to snag Wildcat A. It looked a lot more manageable after a night of sleeping. The trail was snow covered but not treacherous. I opted for microspikes for some extra stability, but Steve bare-booted with no issues. There's a great overlook near the Wildcat summit looking east toward Maine over Sebago lake. We made good time up and down without our packs. We backtracked to the hut and grabbed our packs and then hiked the 4 miles back to the car.

All-in, the trip was just under 15 miles with about 5,700 feet of elevation gain.

Posted by michael.j.maxwell at 6:29 PM