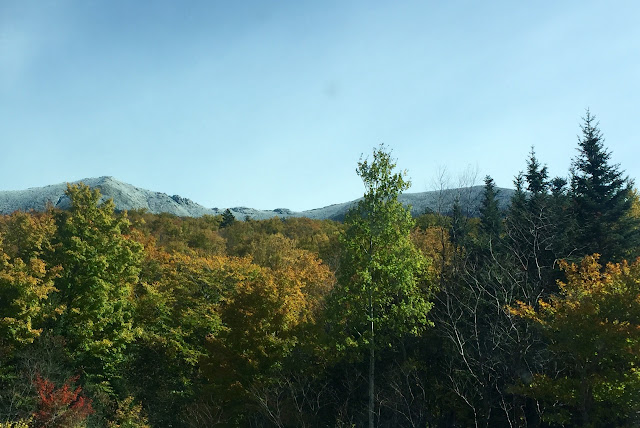 Jacqueline and I headed up North pretty late (left Newton a little after 9). The plan was to hike Mount Hale and potentially camp on Saturday night. The leafers were out in force this weekend with sections of stop and go traffic even north of Concord.

Once we got north of Franconia Notch, the crowds thinned and the drive was beautiful. There was snow on the taller peaks and especially on Washington. It was a cool contrast with the colorful leaves down low and the snow up high.

We started up the trail a little after noon. It is a gradual climb for the first mile or so. There were a few pretty stream crossings and some views through the trees of Washington and other nearby peaks. The last half mile is steeper and rockier, but nothing too difficult. The summit is in a clearing with some grassy patches, but no views to speak of. It was a great place to sit and have lunch.

Round trip it was 4.4 miles and we finished it right around book time of 3 hours, 30 minutes. The temperature was in the 40's and we both agreed that camping didn't sound the best, especially because Jacqueline was fighting a cold. She was a trooper.

We grabbed dinner and beers at the Woodstock Inn on the way back home. We used our camp fire wood in the fireplace and watched a bad movie. It was a good day in the woods. One more down.

Combo of SLR and iPhone pictures here: Pictures
Posted by michael.j.maxwell at 11:05 AM