The ambitious plan was to hike four of the 4K's in one big loop. We would get all three Tripyramids (two official 4Ks) from the Kanc via the Pine Bend Brook trail, and then cut over to Whiteface and Passaconaway on the Kate Sleeper trail and descend to the Oliverian Brook trailhead (trail map included below for reference). We dropped cars at each trailhead and started up to North Tripyramid around 8:30. The trip was to be 16 miles, 6,000 ft of gain, and with a book time of approx 12 hours. We figured we could outpace the book time, but were keeping an eye on the clock to avoid descending in the dark. We planned to bailout on Downes Brook about halfway down Kate Sleeper) if we were behind schedule.

The trail was very gradual for the first couple miles but then steeply ascended to North Tripyramid. We made very good time, and kept pushing to Middle and South Tripyramid. All three peaks are over 4,000 feet, but the South peak is not an official 4,000 footer (inadequate col). When we arrived at the south peak, we were 2 hours ahead of book time. Well ahead of schedule to keep going and get all 4 peaks.

After the south peak, the Mt. Tripyramid trail descends very steeply down the south side of the mountain. We stopped for lunch on an overlook and then began down the steep trail. Somewhere along the way, perhaps distracted by the steep descent, we missed the left turn for the Kate Sleeper trail. By the time we were sure we had missed it, we had gone a mile too far and descended almost 1,400 vertical feet. There was no way we were going to backtrack up the steep trail and have enough time and energy to complete the full hike before dark. 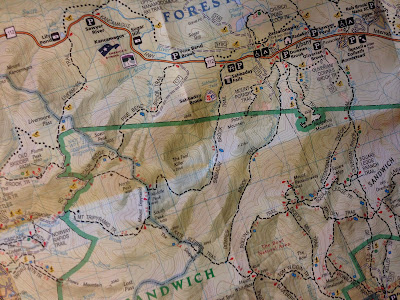 Unfortunately we didn't have a lot of good options for getting back to the car because we were on the wrong side of the mountain. We pulled out the maps and figured out a roundabout way back by continuing down to the bottom of Mt Tripyramid, wrapping around the base of the mountain on Livermore road, and then climbing up the Scaur Ridge trail, and then back down Pine Bend Brook. The frustrating part of this route is that it was be almost exactly as long and challenging as our original planned route, and with 2 fewer peaks off the list. Oh well. Beautiful day and good hike. Distance was just over 16 miles with 5,500 of elevation gain.

Given the amount of leafers up north, I was a little worried about getting a camp site. I guess not a lot of people want to go camping when the temp drops to the low 30's overnight. Their loss.We set up camp at Hancock and grabbed dinner and beers at the Woodstock Inn. Made a big camp fire and crashed hard. Home in time for football on the couch all day Sunday.

Posted by michael.j.maxwell at 2:07 PM