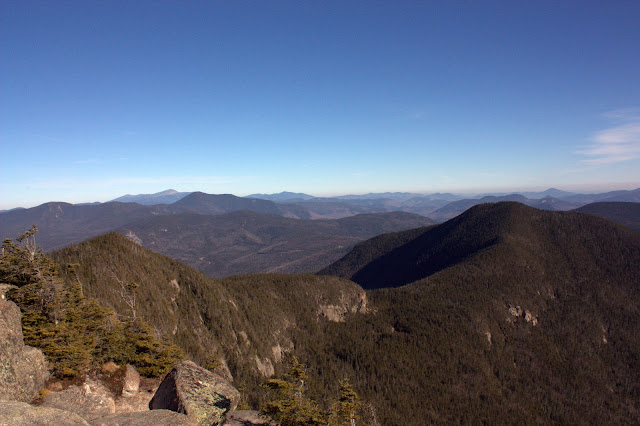 Chris and I got a later than planned start because someone slept through his alarm clock. We made it to the Tripoli Road trailhead at about 9:00.

We had a perfect day for a hike with clear skies and starting temperature in the high 20's. The trail to the Osceola summit was about 3.2 miles long. It was rocky, but a gradual incline, and it was dry so there was very little ice early on. Toward the summit of the first peak, the rocks had a thick layer of ice which required putting on our microspikes. With the spikes it was very doable. Most people we saw had some kind of traction for their boots; however, we came across a few people without anything and think they must have had a pretty long day.

The Osceola summit had awesome views of Waterville Valley and the Tripyramids (which are high on my to-do list). I enjoyed a peanut butter sandwich with some of the last remaining Wonderbread on the planet.

From the summit of Osceola, the mile long trail to Osceola east was steep and pretty rough. The guidebook indicated that we would come across a trail feature called a "chimney" which we learned was a ~50 foot nearly vertical rock wall to climb down. There were sufficient steps and hand holds to make it safe and it ended up being a cool part of the trail.

East Osceola's summit didn't have much for views. After making it to the top we pretty quickly started to make our way back toward Osceola, and to climb back up the chimney. After the hike, Chris and I agreed that the 2 miles traveled between the summits were substantially harder than the 6.4 traveled between the base and the first summit.

From Osceloa we backtracked to the car and caught the first quarter of the Pats game on the radio driving back to Boston. Really nice day trip.

Posted by michael.j.maxwell at 5:33 PM