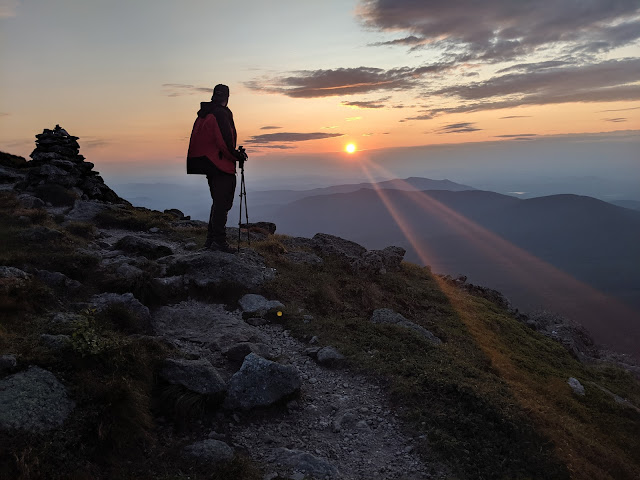 This came about while brainstorming about good ways to finish the 48. I had only Cabot and Monroe left, and definitely did not want to finish on Cabot. It also seemed somewhat anticlimactic to just do Monroe on it's own, so a presi-traverse was the logical way to conclude the list. 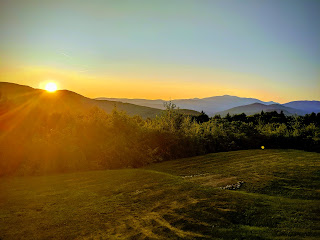 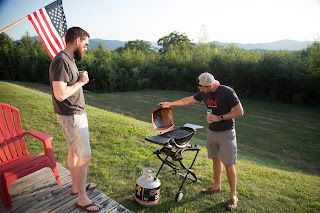 A group of eight of us met up on Friday night just North of N. Conway at an Airbnb. We spotted cars (3 at the south end) and crashed early. Alarms went off at 3AM and we were at the Appalachia trailhead by 4:30AM. The big challenge was trying to time it so we could make the 6PM dinner time at Lake of the Clouds Hut without having to rush the whole time. Steve and I meticulously worked out some "splits" so that we'd know how we were doing on pace (so we could opt to skip some summits if necessary). The 4:30AM start time was actually later than planned, so we started the day in a 30 minute hole. 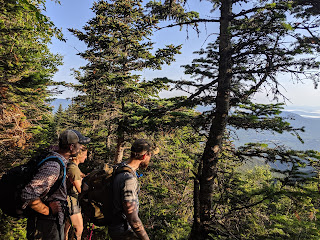 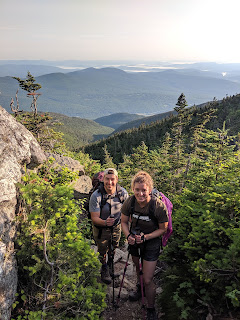 We made excellent pace from the base, and even with the (slightly) delayed start, reached the hut over an hour ahead of our split time for the segment. We dropped packs at Madison Springs Hut and headed up Madison (quick trip) and returned to fill waters at the hut and retrieve our bags. When we reached Adams, we were over 90 minutes ahead of our plan, but with a long way to go. 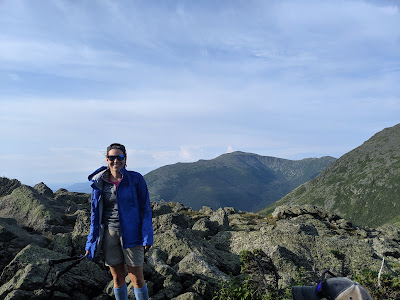 The boulder fields on the ridge between Adams and Jefferson slowed our pace considerably. Even when the grade is relatively flat, it's very difficult to make quick progress while planning every step and occasionally stepping on an unsettled rock. The final approach to Jefferson is also very steep with several false summits along the way. 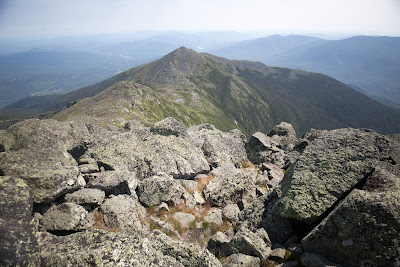 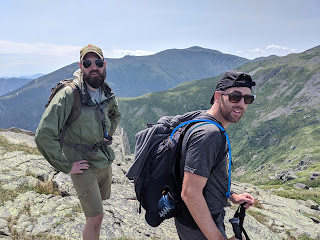 From Jefferson we proceeded toward Washington (which seems impossibly far away). By the time we got to the trail split (one trail headed up to the summit and another circumventing the summit and going straight to Lake of the Clouds Hut), we had lost most of our "lead" against the planned time and we were pretty much right on track to make it to the hut at dinner time. 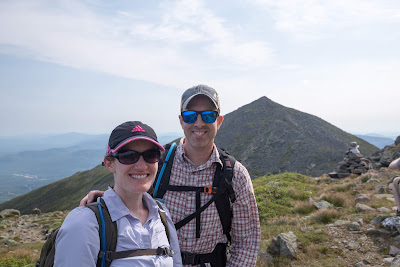 There was some discussion over whether everyone would go to the summit, but ultimately everyone decided to go for it and we made our way to the top. By this point, we had been on the trail for 12+ hours, so it was strange to see people coming down from the Washington summit wearing jeans and sandals (having driven or taken the Cog to the top). The summit was packed with people, so we didn't stay long. We grabbed some snacks and pictures, and headed out again toward Lake of the Clouds. 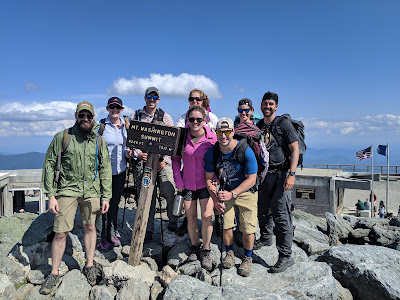 Once over the Washington Summit, I could see Monroe (my 48th and final NH 4,000 footer) just above the hut. It looked very close to the Hut. We arrived at the Hut around 5:30 and found our way to our bunk rooms (for future reference, the AMC Huts will put groups with separate bookings in the same bunk room if you tell them in advance that you're a single group). We didn't know this, and ended up scattered throughout the hut (NBD). Dinner was a full Turkey dinner with potatoes, gravy, green beans, etc. It was delicious. 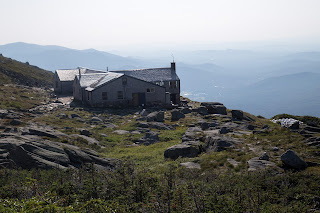 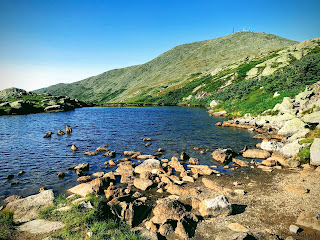 After dinner, the group geared back up to join me for the last 300 vertical feet to the top of Mount Monroe. I felt guilty because I know everyone was beat, but I was really grateful that everyone understood that I couldn't sleep knowing I was 0.3 miles from the end of my 13+ year goal. 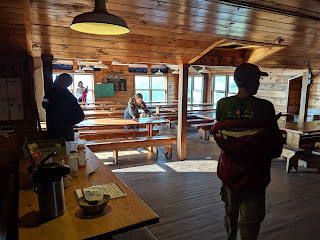 Simply put, this was the perfect way to finish. We reached Monroe's summit just before sunset. Jacqueline busted out a bottle of champagne that she had lugged 13+ miles and 7,000+ vertical feet over 5 summits. We hung out and watched the sunset and made our way back to the hut. 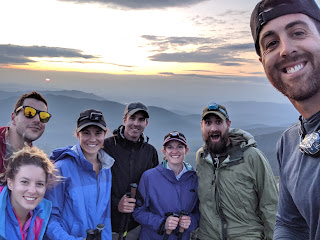 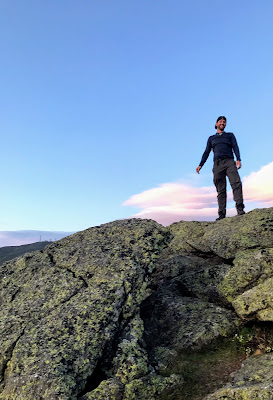 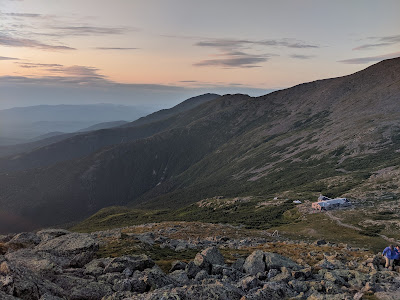 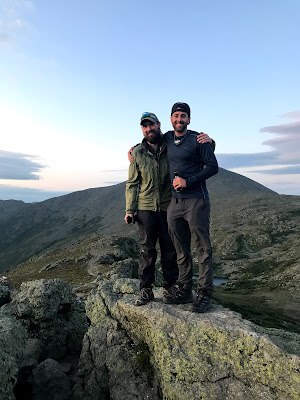 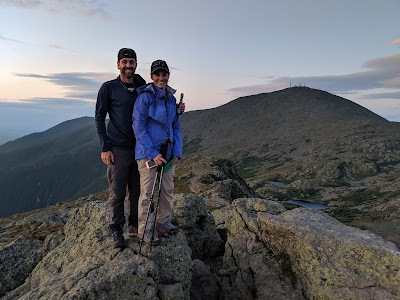 Nobody lasted long. After a couple swigs of bourbon, and a look at the impressive stars on a clear night, we were all in bed well before 10. 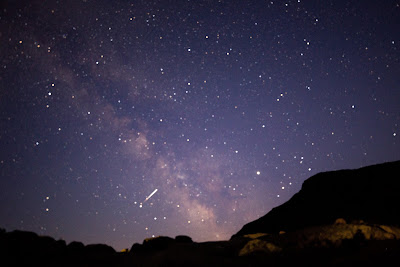 The Hut "Croo" doesn't fuck around with the wake up calls. At 6:30, they were going room to room with a guitar and singing. Breakfast was excellent, and we were back on the trail around 8:00. I was definitely sore, but felt way better than I expected to, and Day 2 was comparatively quite easy (~7 miles and 1,500 elevation gain). 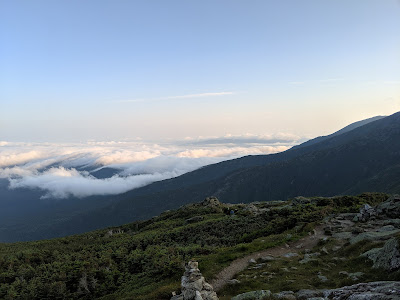 We by-passed Monroe and went up over Franklin on the way to Eisenhower. It was foggy and windy when we started, but the fog burned off just in time for us to reach the Eisenhower summit. 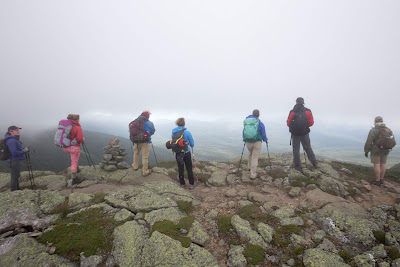 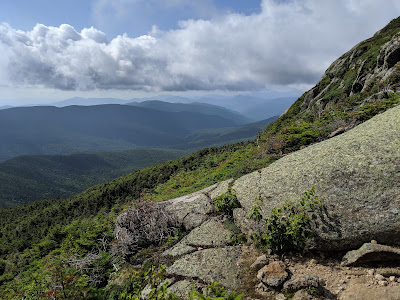 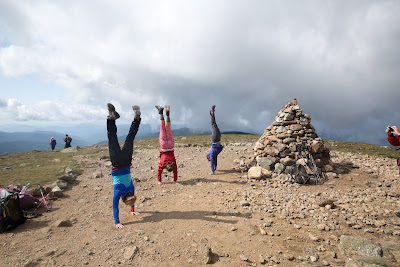 From there, we made excellent time on the well worn (not rocky) trail to Pierce. At that point the group split up with half going over Jackson and the other half headed straight down to the cars. We met at the bottom and everyone headed out. 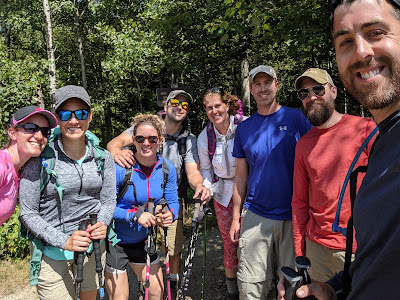 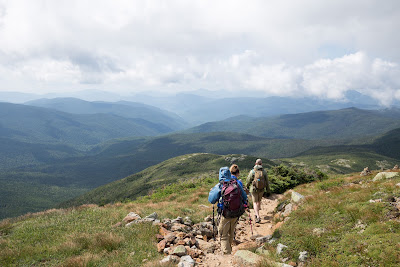 A few of us went over to "The Lodge" (a property of the Mt Washington Hotel) to relax on Sunday night. Jacqueline and I headed to meet Jimmy, Christine and the girls at the lake on Monday. 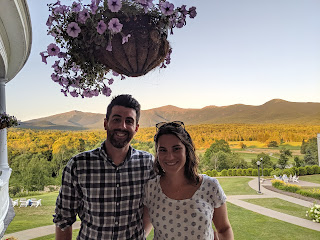 Going into this trip, I was really worried about my knee (which I impaled in a yard work accident in May) and my back, and neither bothered me at all on the trip. It was a huge relief.

Not sure what's next. I haven't thought much about other lists yet, although I'm obviously aware of them. I'm definitely going to do some more backpacking over old favorites. I'm looking forward to some more winter stuff now that I have all the gear. I'll also join Steve as much as I can while he's wrapping up his list.

Posted by michael.j.maxwell at 7:14 AM