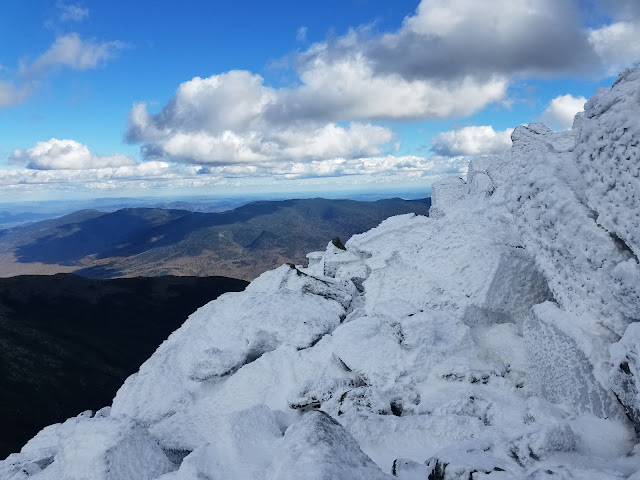 So this was a long one. Alarm went off at 4:10AM in Norwood which was early enough to get me to the Appalachia trailhead by 7:30. I met Steve there to drop one car and we continued to Caps Ridge trailhead to start the hike at 8:00. The plan was a traverse of the Northern Presidential range starting at Caps ridge, ascending the Caps Ridge trail to Jefferson, and then following the AT to Adams and Madison. We’d then descend via Watson’s Path/Valley Way to Appalachia to pick up the second car. The weather was iffy, and we had read in the book that with fronts approaching, the worst weather would likely by in Edmand’s Col (which acts as a wind tunnel). We figured we’d grab the Jefferson summit and see how things were progressing. 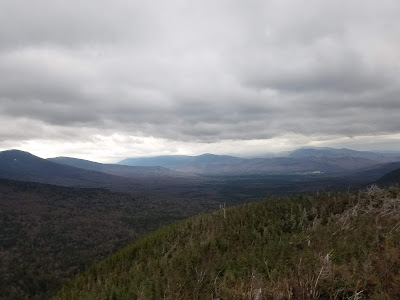 Caps Ridge trail climbs above the treeline quickly. I saw somewhere that it’s the highest trailhead in NH (ignoring Mt Washington auto road trails). It was cool, breezy, and very foggy. Views were non-existent as we climbed up the caps ridge trail toward Jefferson.  Nearing the summit of Jefferson, the trail had a thin layer of snow and ice, but was still passable without spikes. The wind had built and was now enough to push us around a little bit. There was also occasional sleet/hail mixed in with the cold fog. We sheltered behind a rock and got the map out to game plan. We were both still leaning toward following the plan, but agreed to check-in at the top.

The summit was pretty unpleasant. Visibility was maybe 20-30 feet and the wind was uncomfortably strong. Had to stay low to preserve balance.  We debated the decision for a minute or two, but both decided it was not safe to continue on the exposed ridge toward Edmands Col (where the weather might get worse). We already could barely see from cairn to cairn and if it got any worse, we wouldn’t have been able to. We started back down.

A few hundred feet below the summit, the wind softened considerably and the visibility improved. We decided not to fully abandon our plan, and headed for a trail called “the cornice” which parallels the AT about 800 feet below the ridge.  The trail is relatively flat in terms of elevation gain, but it is also hardly a trail at all. It’s just a series of markers in a massive boulder field with patches of snow and ice. Traversing the 1.1 miles of the Cornice was incredibly slow going. It added a substantial amount of time to our already long day. As we approached the intersection with the Randolph path, the weather began to clear. Sun burned the fog away everywhere (except the summits of Jefferson and Washington), and the wind continued to decrease. When we got back to the ridge, the weather was great and we were making good time again.

The summit approach to Adams was a little dicey due to all of the rime, but not enough to justify spikes. We didn’t stay long on Adams, but the view was incredible. 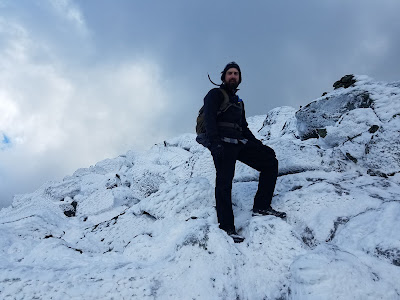 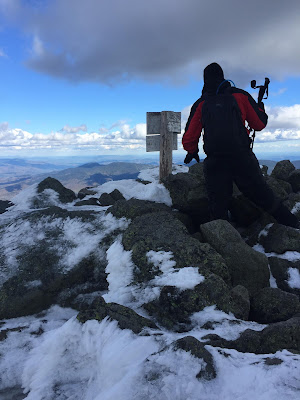 We descended the north side of Adams toward Madison Springs hut and stopped there to eat some food and consider the rest of the plan. We decided that if we kept a good pace, we could get up to Madison, and make it back down by around 6PM (sunset at 6:15). Madison was pleasantly easy to ascend, and from the top we could see the whole path down to the valley floor toward Route 2 and the Appalachia trailhead in the distance. 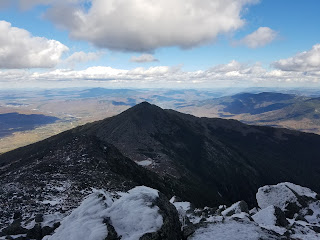 My general shoddy trail math is that I can make ~3 miles per hour on flats and moderate downhills, 2mph on moderate uphills. And 3mph on flats. This looked like a moderate downhill, so we were assuming close to 2mph. 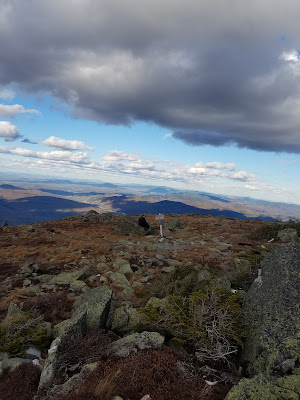 This fails to account for the fact that most of my hiking experience remains on established trails below the treeline with only small sections of exposed climbing on summit approaches. My shoddy trail math was very off, and it took us nearly 2 hours to descend the first 1.5 miles. We were going to be hiking in the dark for a long time.

We were prepared for this unfortunate eventuality, but I’d be lying if I said I enjoyed this part. It was a long and uncomfortable day even by my standards and tolerance for long uncomfortable days.  The first 8 hours of hiking were unbelievable. I could’ve done without the last 3:15. 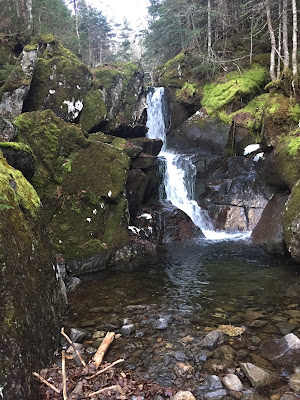 We hit the trailhead around 7:15 PM. From there we grabbed a cabin at Crawford Notch campground and headed to Moat Mountain (Barbeque and Brewery). I checked my Garmin smartwatch data on the way over which told me that I needed to consume 3,500 calories before midnight to stay “on track” for the day. I did my best to accomplish that goal at Moat.

Notes:
Despite the tough finish, I would definitely do this again. I would avoid the Cornice if weather allowed and stick to the ridge (no regrets on the decision this time), and I would consider taking Airline and accepting some back-tracking as opposed to Watson’s Path.

Posted by michael.j.maxwell at 5:09 PM