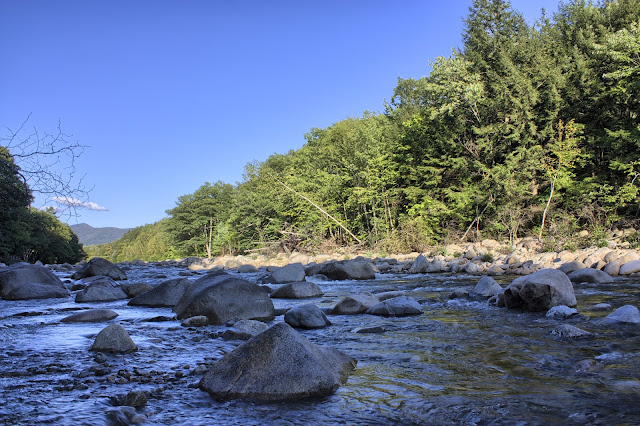 Drove up to Lincoln on Saturday after getting back from Avalon. Tried to get a site at the Hancock campground but it was full up. The ranger recommended Tripoli Road which is all backcountry camping. I decided to try a commercial place instead since Tripoli would be a good 45 minute drive from the trailhead. I  got the last site at Maple Haven in Woodstock. My site # was D-1 with the "D" standing for "dump station"(Redneck sewage). The attendant told me it'd be totally fine if I left before the RV's did (and he was right).

Got a few beers at the Woodstock Brewery and met a couple of locals who had walked over to the bar from their house. After talking to them for about 20 minutes, they asked where I was staying.  After I told them, they acknowledged that they had seen me setting up my campsite (Cue Dueling Banjos music from Deliverance).  While it was a sort of creepy acknowledgement, they were super nice and didn't try to murder me at all, which was nice.

I slept without the rain fly since it was completely clear but didn't account for the dew (campsite in a grass valley). I managed to stay dry but had a little bit of wet gear.

The goal for this hike was to get a couple of less appealing peaks so as to save the good ones for when I have company. I had heard that the Hancocks were steep and didn't have great views, so they seemed like a good target. I got to the trailhead around 7:30 and started up. The whole hike was just under 10 miles. The trail was lightly used and pretty poorly marked. Some of the back-country camp site trails seemed like part of the Hancock trail which made for some annoying turn-arounds and confusion. For the first 3.6 miles, the trail was remarkably flat. Almost no elevation gain. The last 0.7 to the north peak was brutally steep. No switchbacks, just straight up with no break. Very slow pace to the top. The summit itself has no views but there was a nice overlook nearby. I continued on the Hancock Loop to South Hancock which was an easy and relatively flat walk. The way down from South Hancock is even steeper than the North Peak (which is why they recommend doing South before North in the guidebook... which I ignored). After I got down from the steep part, I did the last 3 miles with a guy named Mark from Bridgewater who had done all the 4K's already (and the hundred highest).  He's working off the really obscure lists now and had a lot of good hiking stories and advice.

I got down a little after 1:00, just under book time of 6 hours 15 minutes.  Overall, a really nice day in the woods.

Casualties: Made a miraculous catch to keep my droid from dropping off a ridge, but in pinning it to my chest it made contact with a buckle and cracked the screen in half. 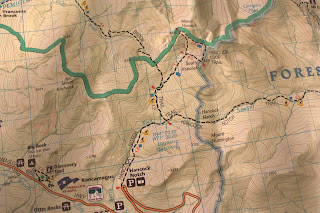 Posted by michael.j.maxwell at 2:37 PM