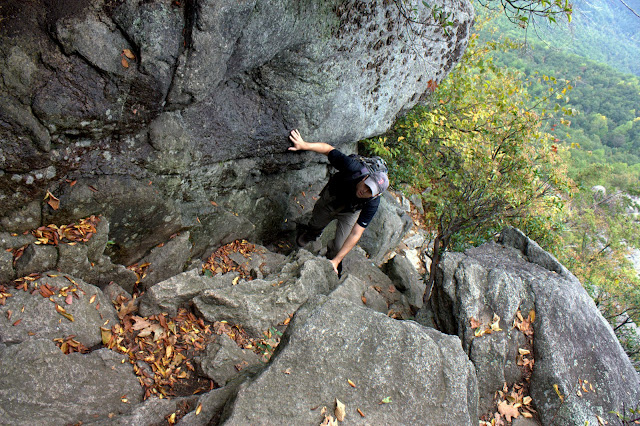 Michael is down here this week and yesterday we hiked Old Rag Mountain out in Shenandoah National Park. It's a trail we've done before (and sent pictures from before) but last time was with my cell phone camera, so these came out a lot better. It was very cloudy, gray, and humid, but cooler than it has been. It also rained for most of our hike down, but not hard.

There was a dog hanging out in the parking lot. Really laid back. It's collar said "I live across from the parking lot. I know how to get back. Please don't take me home." So I guess he does that a lot. We named him Rufus. We made the mistake of petting him, because he then tried to follow us out of the parking lot. We went through a closed side gate and closed it behind us so he would stay behind. That slowed him for about two seconds because he ran under a hole in the fence, which he has clearly done a ton of times. He then walked with us or ahead of us along the road for about a mile to the trail head. Dogs are not allowed on the trail because there is about a mile of climbing over rocks, which a dog wouldn't be able to do. Fortunately, Rufus was really smart and stopped by himself at the trail head. He watched us go up, but didn't follow.

Almost two hours later, and after already climbing over some difficult rocks, we heard a sound like jangling keys coming through the woods. All of a sudden Rufus appeared again. He ran right past us, up through the rocks. We stood there in disbelief. A little ways farther, we found Rufus hiding out and taking a break, which you'll see in the pictures. I wonder if his owners know that he climbs mountains during the day.

Posted by michael.j.maxwell at 5:49 PM